Thanks for reading BikePortland.

Please consider a $10/month subscription or a one-time payment
to help maintain and expand this vital community resource. 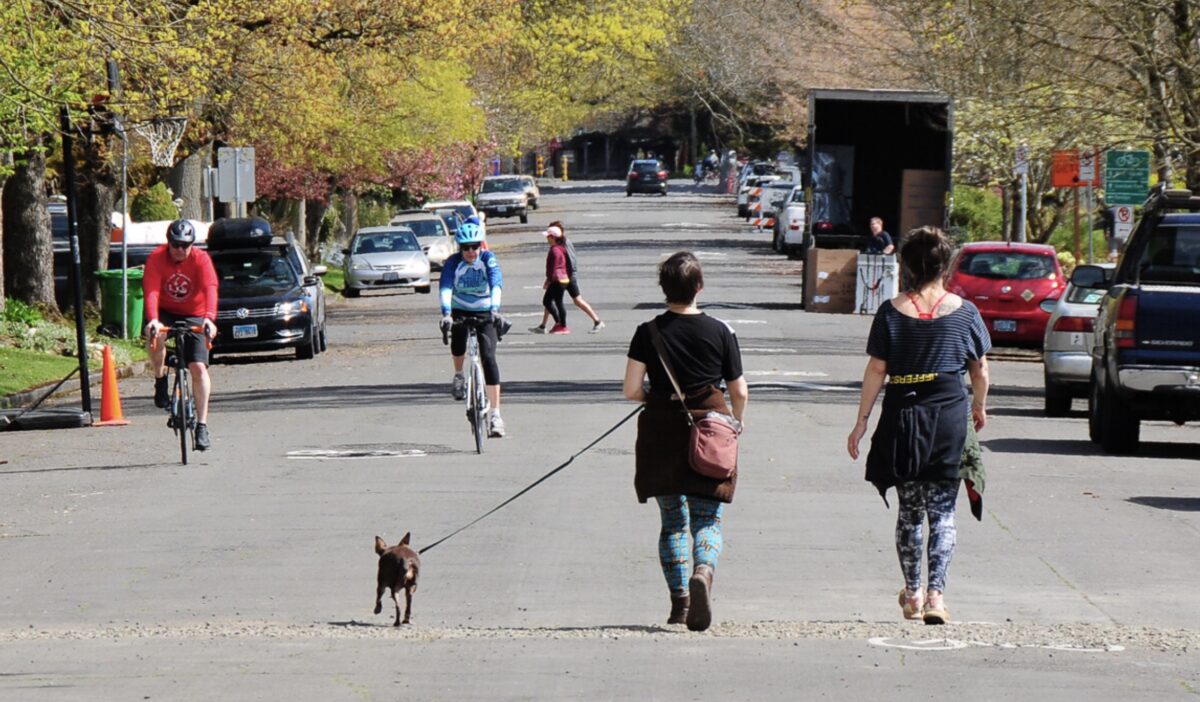 This has become a common site in some Portland neighborhoods as people seek space beyond sidewalks.
(Photo: J. Maus/BikePortland) 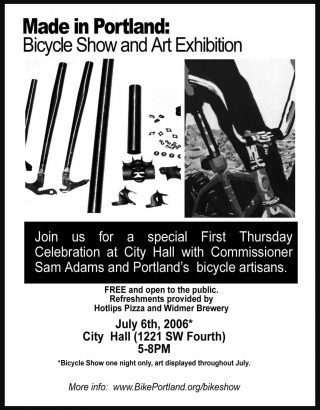 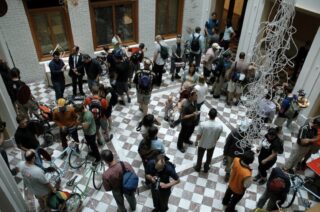 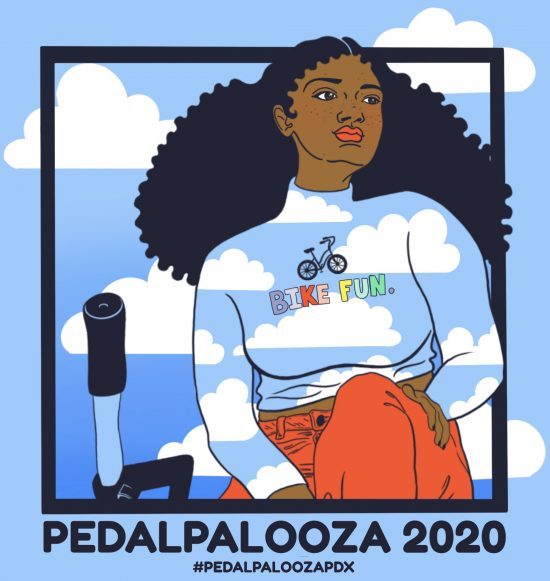 You didn’t think it would be cancelled, did you?
(Artwork by Beth Krynick) 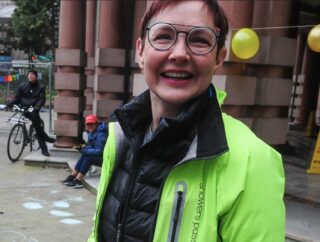 Sarah Iannarone at a rally for the 2030 Bike Plan in February.
(Photo: J. Maus/BikePortland)

If Sarah Iannarone gets elected to be Portland’s next mayor our streets will probably look and feel a lot different.

A strong transportation reform activist who gets around via e-bike and sits on the Portland Bureau of Transportation’s bicycle and budget advisory committees, Iannarone would very likely oversee PBOT if given the opportunity.

That might be why many of Portland’s grassroots transportation activists support her campaign. That might also be why her recently released Recovery and Resiliency Plan calls for things like more investments in bikeways, free transit, and an e-bike ownership incentive program. She’d also created “zero emissions thrive zones” and “pedestrian streets”.

I recently asked Iannarone to weigh in on the open streets debate. That is, what (if anything) should Portland do to take advantage of major changes in how people are getting around during the Covid-19 outbreak?[Read more…]

“I’m a little disappointed [advocates are] so singularly focused on this issue that they can’t really take into consideration the full breadth of what I’m dealing with as transportation commissioner.”
— Chloe Eudaly, City Commissioner 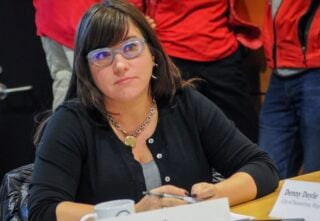 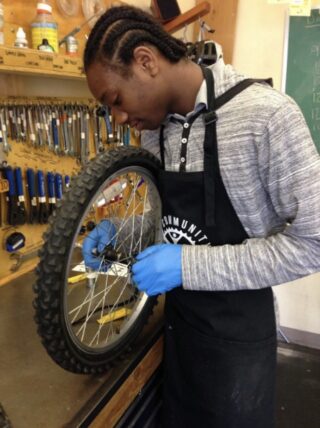 Publisher’s note: This article was written by Riley Gabriel, a program mechanic at the Community Cycling Center.[Read more…] 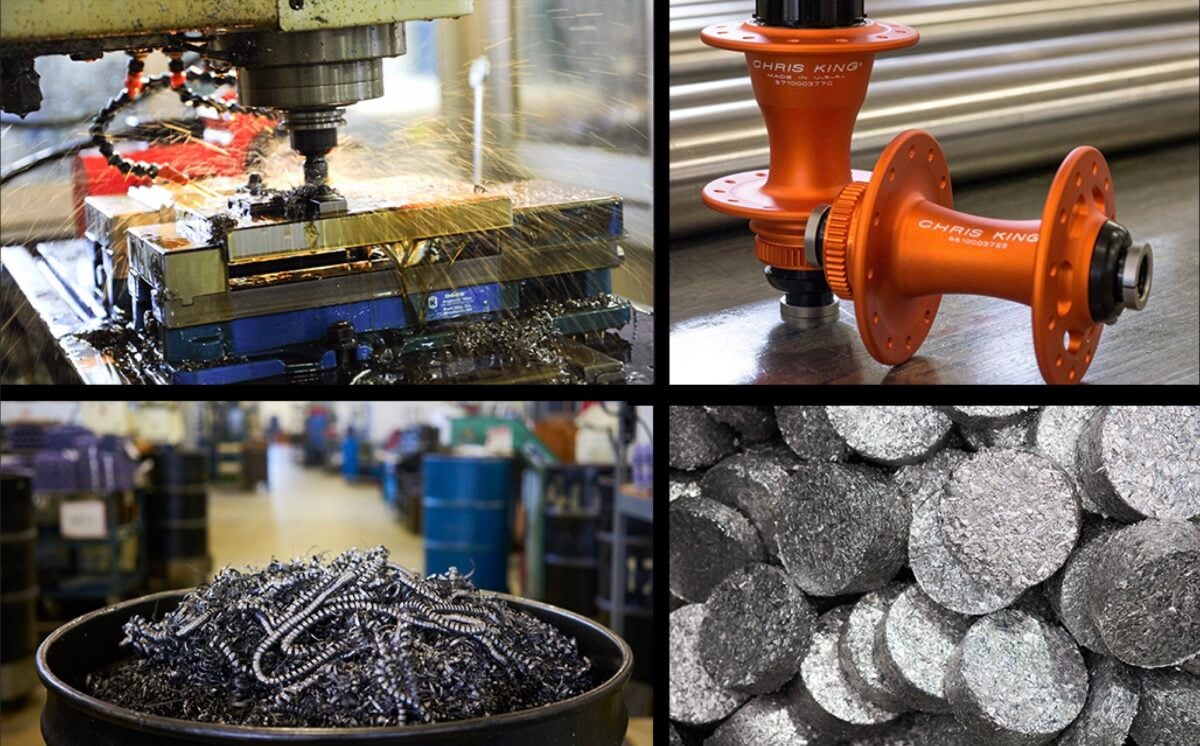 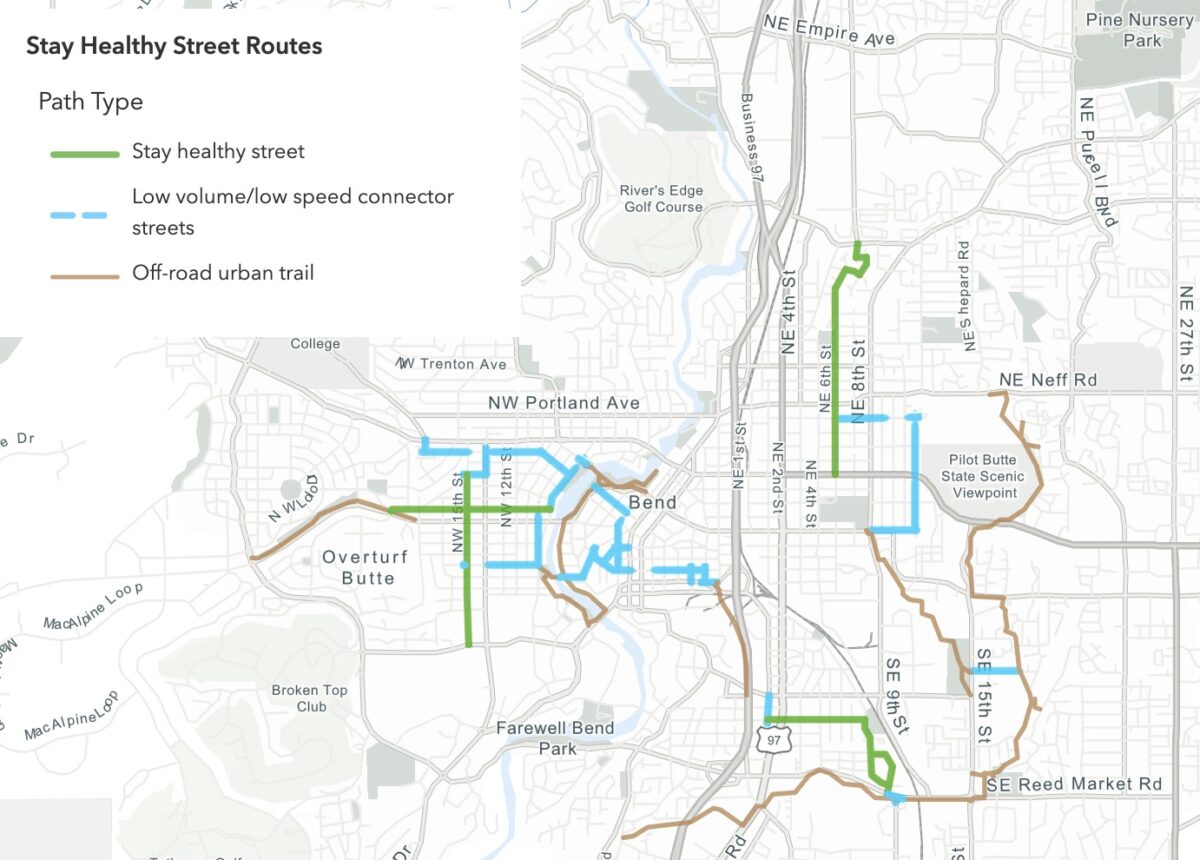 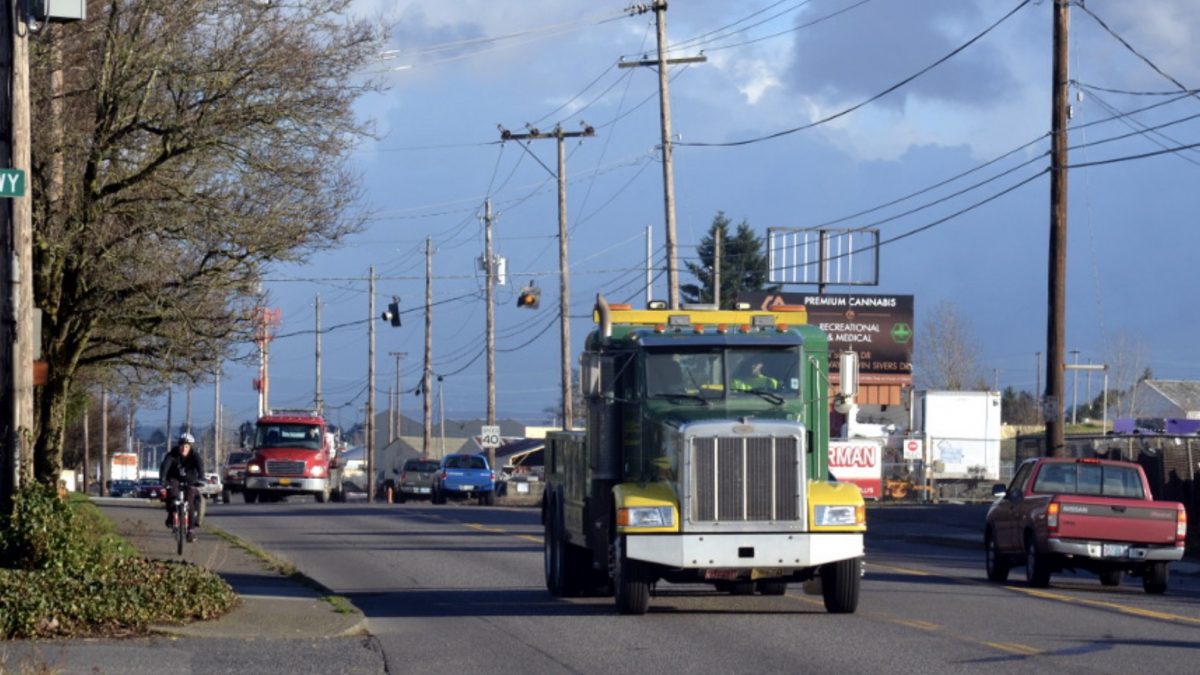 There are some very exciting bike projects in this plan.
(Photo: Michael Andersen) 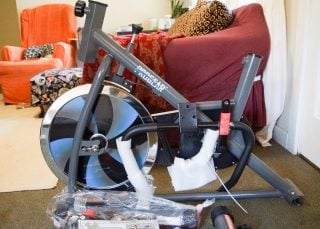 Pre-Assembly. This is not an endorsement of any kind other than for me: I can use a ratchet set.
(Photo: Becky Jo)

Are you frustrated? Maybe a little bit? I love seeing my neighbors out on their bikes more, but I’m frustrated our city isn’t giving more road ownership to pedestrians and cyclists during this unprecedented time.

I’m just now getting comfortable enough to bike anywhere for a 20-25 mile roundtrip, but I certainly can’t get my kids to go that far, nor would I want to in these conditions. How are you doing with the increased reckless driving versus less traffic? What about kids biking in it? Some kids on the 2nd grader’s classroom calls are saying they’re out biking all over on their own; but you have to take a kids’ statements with a grain of salt, you know?[Read more…] 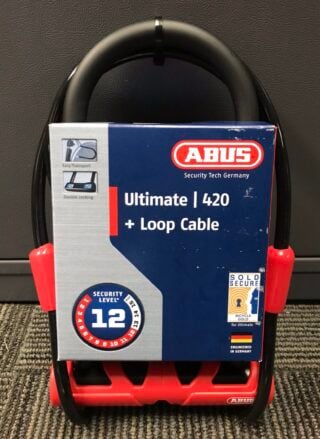 Earlier this month we shared that the leader of the Portland Police Bureau Bike Theft Task Force said we could “end bike theft overnight” if everyone registered their bikes online.

Thanks to an ongoing partnership with Abus Locks, the Portland Bureau of Transportation and registration site Project 529, the Task Force is adding a new twist to their “U Lock U Rock!” program. Once live events like Sunday Parkways start up again, they’ll be doing more cable-lock-for-u-lock exchanges. For now, all you need is a phone and an internet connection. [Read more…] 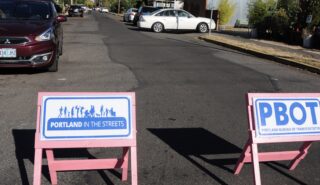 As the debate rages about whether or not Portland should add space and safety to streets for vulnerable people, a former mayor thinks it’s time to move forward.

Sam Adams was on Portland City Council from 2005 to 2012 — first as a commissioner, then as mayor. Throughout his tenure he was in charge of the Portland Bureau of Transportation and the agency was one of this top priorities. Adams now finds himself on the outside looking in as he eyes the council seat occupied by the current PBOT Commissioner Chloe Eudaly. [Read more…] 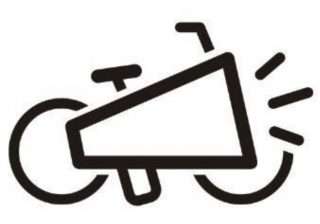 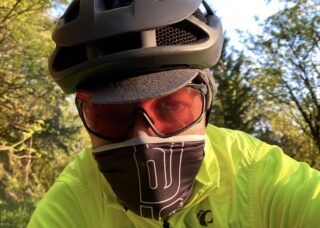 A bit of fog on my lenses during a ride in Forest Park early this morning.

Welcome to the first edition of Forums Friday, a new thing we’re doing to highlight notable posts from the BikePortland Forums (you should grab a log-in and join us!).

We know. It’s a bummer. Wearing a mask while riding a bike isn’t great — especially when it’s above 50-degrees. They cause glasses to fog up, they make you breathe your own warm breathe, they fill with sweat and snot, they make it impossible to eat and drink on-the-fly.

But they also might save your life or the life another person. And you should be wearing one.

As we adjust to this new normal, I felt the post from Forum member “amandaSEPDX” deserved more attention. Here’s (a slightly edited version of) what she posted:[Read more…]

“I understand people see this as an amazing opportunity… but I’m nervous about the consequences and I’m questioning whether this is the right time to re-allocate resources.” 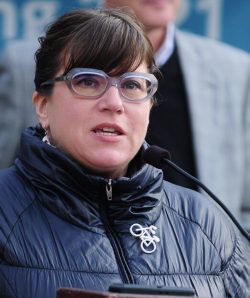 “Portland’s transportation advocacy ecosystem has never been stronger. What we’re missing is leadership from city hall.”

Publisher’s note: While we’ve made a lot of noise in the past month about the need for immediate street changes to reflect new behaviors, another big part of this conversation is how best to transition our streets when quarantine is lifted. Kiel Johnson, a BikePortland contributor and owner of Go By Bike Shop & Valet under the Aerial Tram, reflects on that issue in his letter below. 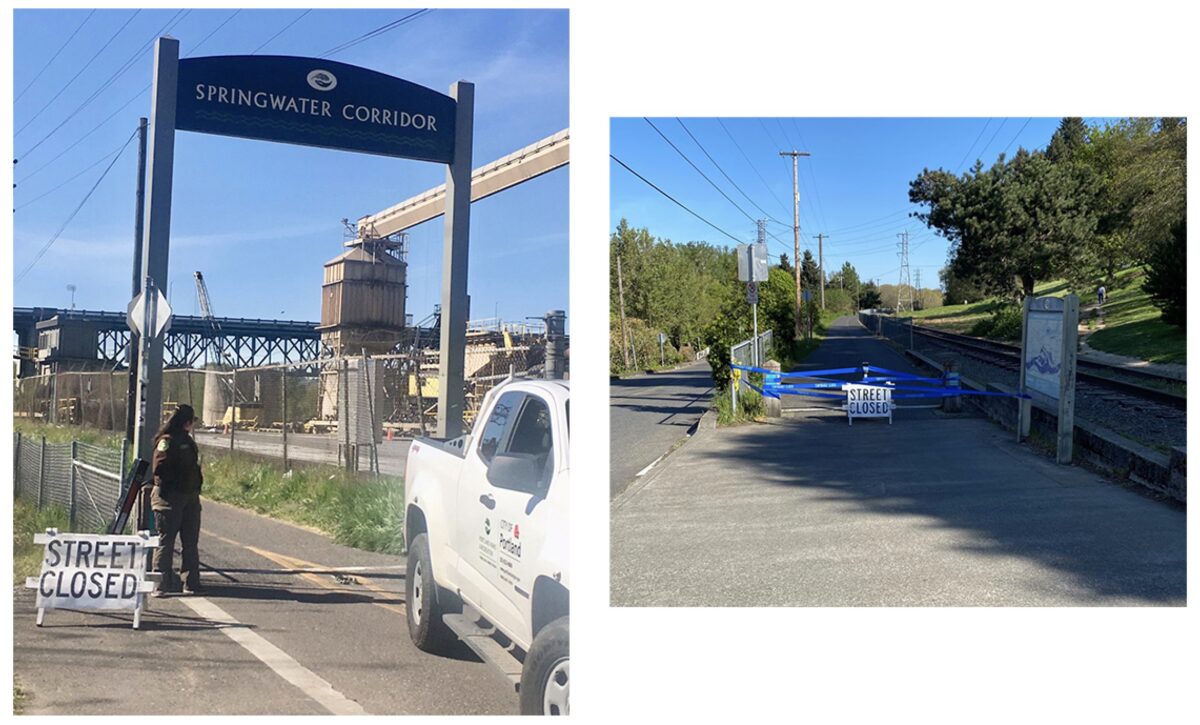 Closures just erected. Photos by @ClareB_PDX and @antoniatamer via Twitter.

A popular, three-mile section of the Springwater Corridor path is closed this morning. It’s unclear which agency is responsible or how long the closure will last.

Photos tweeted by BikePortland readers this morning show a Portland Parks truck and what looks to be a park ranger along with “STREET CLOSED” signage at the main entrances on SE 4th and Ivon Street and at SE Spokane Street in Sellwood (at Sellwood Bridge).

This section of the path is a crucial link in our transportation network. Other options for bicycle users like SE Milwaukie and SE 17th avenues are much more dangerous and out-of-direction. With more people biking and walking during the coronavirus quarantine, the Springwater has become very crowded despite it not being wide enough for safe social distancing.
[Read more…] 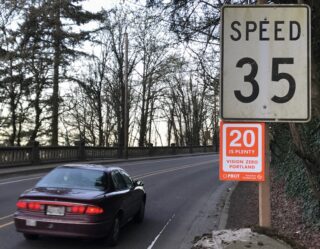 On May 1st, traffic engineers in the state of Oregon will no longer rely on an outdated and dangerous method for setting speed limits. Thanks to new rules adopted by the Oregon Transportation Commission last month, the process for for designating speeds has changed dramatically and now goes way beyond the traditional 85 percentile method.

The 85th percentile rule has dominated U.S. traffic engineering since it was championed in the 1960s. It says limits should set at the speed which 85% of drivers are currently driving at or under. What could possibly go wrong? Since it’s a universal phenomenon that people drive faster than what’s safe, this methodology is very biased toward higher speeds and it’s a big factor in America’s rising traffic death toll. [Read more…]