Skip to content
Once upon a time, when fixies were still novel and the whole “urban lumberjack” thing was still nascent, I devoted a fair amount of pixels to Peter Buchanan-Smith and his Best Made Co., which achieved considerable notoriety by painting the handles of ordinary axes and selling them to urban idiots at a considerable premium.

Well, the joke’s on me because according to a recent article in the New York Times axes are still very much a part of the zeitgeist:

@bikesnobnyc has been lampooning this trend for the better part of a decade. Nice to see that you finally cottoned on, @nytimes.

The joke is on me again–and again, because Best Made Co. is apparently still going strong.

And Peter Buchanan-Smith, a graphic designer to the stars, was the champion of the fancy ax.


In 2009, he started a boutique ax line called Best Made Co., for which he sourced high-quality axes from another maker and painted the handles with colorful block and stripe motifs, evoking both Pendleton and Wes Anderson’s “Moonrise Kingdom.” They were a sensation.


Today, the brand’s brick-and-mortar stores in New York and Los Angeles stock all manner of nostalgic but purposeful camping gear. Stalwart offerings are axes ($228 to $398) and hatchets (similar but smaller, $98 to $228). In-store events serve to culturally align the ax with third-wave coffee, houseplant collecting and listening to vinyl.

The last time I thought about Best Made was back in 2017, when I attended a Specialized event at their store in Manhattan, which was just as stupid as I thought it would be.  (I mean the store, not the launch event.) And as I mentioned in my subsequent post, back in 2010 Buchanan-Smith did address my commentary about him and Best Made, albeit through an intermediary:

Thanks so much for the link. I’ll comment when he shows me his face, tells me his real name, or is willing to test drive my product… then he’ll have grown a pair of balls big enough to slap down on the proverbial glass table… Thanks so much for sending the post. Always a pleasure to see Best Made inspiring such critical thinking. All the best, Peter

Here’s the reply I invited the intermediary to share with Peter:

Thanks for forwarding. Admittedly I’m not a woodsman, nor do I have any real wood-chopping experience. However, when someone forwarded me an article about a person who takes axes “Made by a secret source in Maine,” paints them, and sells them at prices starting at $180 naturally it piqued my interest, for we often see this sort of thing in the bicycle industry (frames and components that come from a single source but are sold at varying prices under various branding) and it’s the sort of thing I enjoy writing about in a humorous fashion on my blog.


According to a reader the “secret source in Maine” is likely Snow & Nealley, as the ax resembles their Hudson Bay Camping Axe:

They generally sell for about $75:

Again, I’m no axe expert (ax-pert?), and if Mr. Buchanan-Smith’s ax is actually some proprietary design that works far better than the Snow & Nealley Hudson Bay Camping Axe then I certainly owe him an apology And even if it is simply a Snow & Nealey Hudson Bay Camping Axe that costs two to three times as much because it has a painted handle, the fact that people are attracted to them and want to pay for them is all that should matter to Mr. Buchanan-Smith. I’m merely a bike blogger, and the people who read my blog are generally not contemplating such a purchase in the first place. In the end, his success is what’s important.


In any case, my face and name are no secret:


and if he is serious about “test driving” his product I would gladly try it alongside a Snow & Nealley Hudson Bay Camping Axe and see if I can tell the difference (though as a non-woodsman he might have to highlight any differences that extend beyond the handle color since I’d doubtless miss any subtleties.)


Again, I’m merely a wiseass bike blogger and a “pop culture bedazzler,” and Mr. Buchanan-Smith’s success in his own world is really all that matters in the final analysis, but in any case please feel free to forward him this email. While Best Made’s offerings are not for me, I certainly bear him no ill will and wish him all the best.

Looking back at all this with 2020 just days away, I think about how two bros without balls bickering through an intermediary is what this past decade was all about.

Anyway, it occurs to me that there’s something about Best Made I never understood until now.  See, my son recently joined the Cub Scouts, and not too long ago we went to the Scout Store up in Westchester to get him his uniform and scouting sundries.  Never having been a Scout myself, the Scout Shop was a new experience for me, and it was, to put it simply, awesome.  Pocket knives, camping supplies, handbooks on every conceivable subject…  And only now as I read this latest axe article do I realize that the Best Made Co. is just a Scout Shop for adult douchebags.  It’s so simple!  I mean I was sort of circling around it when I mentioned merit badges in the Specialized post: 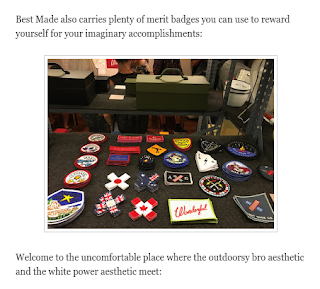 But I didn’t really get it until now.

Nevertheless, the Best Made Co. does fulfill an important need, such as supplying accurate timepieces for under $1,000:

Sure, they typical Best Made customer is getting the exact time beamed directly from space via a smartphone, smartwatch, laptop, and tablet, but none of those items has an old-timey brass key or looks like a prop from a Wes Anderson movie.

(You could also buy a deck clock direct from the manufacturer for like $200 but that’s just silly when you can spend five times as much with Best Made.)

As for the rest of the Times article, you can’t swing an axe anywhere near it without hitting something to scoff at:

You can put an axe through a log, but an axe can’t put a kid through college.

Sun Mar 29 , 2020
This website is archived for historical purposes and is no longer being maintained or updated. “Transportation choices play an important role in building and maintaining healthy communities. The Transportation and Health Tool can help create safe and convenient transportation networks in communities. I look forward to continuing our collaboration with […]