© Provided by This Is Money
MailOnline logo

Mini has showcased a new electric and self-driving compact car that at the push of a button can transform into a ‘living room on wheels’ – and it could be on the road within a decade, which will be just in time for when the ban on new petrol and diesel cars is expected to be imposed in Britain.

The Oxford-based car maker has unveiled the Mini Urbanaut as a pointer towards where the iconic British brand may be in 2030 – with a range of battery-powered and significantly autonomous superminis that double as a relaxing sanctuary for drivers and passengers complete with a comfortable sofa in the rear, fold-down dashboard day-bed, dining table, and even a leafy green potted plant.

It is part of German parent company BMW’s ambitious ‘NextGen2020’ programme showing how accelerating hi-tech and changing social attitudes are creating a new generation of green, zero-emissions cars with vegan leather-free interiors and parts made from recycled metals, materials and plastics.

© Provided by This Is Money
Vision of the future: This is the Mini Urbanaut concept – a compact MPV the BMW-owned brand says it could be making in a decade’s time


It comes as Prime Minister Boris Johnson is expected to announce the banning of all new petrol and diesel cars from 2030, and hybrids from 2035, with only pure electric vehicles available for sale after that date.

Designers say the electric Urbanaut could be as revolutionary in 2030 as Sir Alec Issigonis’s original frugal 10-foot square Mini was in 1959 before becoming an icon of the Swinging Sixties.

But for those with long memories, there is also an intriguing twist which BMW has not highlighted.

For the exterior of the Mini Urbanaut bears an uncanny resemblance to an earlier Mini compact people-carrier concept called the Mini Spiritual Too revealed some 23 years ago.

© Provided by This Is Money
Vision Urbanaut comes as Prime Minister Boris Johnson is expected to announce the banning of all new petrol and diesel cars from 2030, and hybrids from 2035, with only pure electric vehicles available for sale after that date


This was one of two futuristic Minis, created when now defunct Rover was still part of BMW, which stole the 1997 Geneva Motor Show some four years before the final production MINI with a completely different look hit the road.

The radical and highly-praised Spiritual and Spiritual Too designs of 23 years ago, created by Rover design chief Geoff Upex and his British team, never made it into production.

Some suspected that the cautiously conservative BMW bosses of the day considered them just too radical and ahead of their time, while others referred to Spiritual pair as ‘the Minis after-next.’

But the reprise of that broad shape in the form of the new Urbanaut – though only in digital form for now – may suggest its time has finally come and point towards the creation of some future smaller electric Minis to rival the Mercedes-Benz Smart cars.

Space under the rear seats of the Spiritual where a petrol engine would originally have sat could today, in the Urbanaut, house an electric motor with batteries lying flat under the floor area, for example.

Although tall for a Mini, it is only 4.46-metres long but exemplifies ‘creative use of space’.

BMW notes: ‘Urbanaut provides the ideal environment in which to go on a journey. But having arrived at the chosen destination, it can transform into a living room in just a few simple steps.’

Unlike the four-door Spiritual Too of 1997, the Mini Urbanaut has only one large van-like sliding side door through which the driver and all passengers enter and exit.

When the car is parked, the driver’s area transforms into a comfortable and spacious seating area.

‘With the door open, it is even possible to sit on the floor,’ Mini bosses explain.

When in fully autonomous mode, the steering wheel retreats into the minimalist dashboard providing a ‘digital detox’ – there are no buttons, switches or dials. A display in the dashboard provides route instructions or hazard alerts.

If the driver parks up, the entire dashboard itself can be lowered and turned into a flat daybed, complete with lightweight sleeping bag.

The windscreen swings open from the top hinges to provide what BMW calls a ‘street balcony’.

It even has a ‘cosy corner’ in the back of the car.

The flexible front seats can swing around to help create a social area in the back – much like a modern campervan or motorhome.

A textile-covered loop extends over and above the seat bench and has the option of interior LED back-lighting.

A small integrated table – complete with a potted plant – sits opposite the main sliding door and adds to the ‘lounge’ feeling.

The vehicle is fully wi-fi and digitally connected so can act as an office or chilling space on wheels.

The ethical Urbanaut is leather-free and has no chrome bling: ‘The dominant material in the interior is knitted textile, which combines cosiness and quality with softness and comfort.

Gallery: The 50-year story of the Suzuki Jimny (Motoring Research)

‘Cork on the steering wheel and sections of the floor adds a special touch thanks to its natural feel, and ensures an authentically pleasant interior climate’.

BMW says: ‘The central section of the car has an open design. It offers quick access to all seating areas but also serves as a place to sit in itself when the car is stationery

‘A small integrated table with a plant adds a finishing touch to the interior fittings.’

Once inside, there are three modes or what BMW calls ‘moments’: Wanderlust, Chill, and Vibe.

Wanderlust allows the user to drive the vehicle: ‘When the customer wants to drive themselves, a tap of a finger on the Mini logo brings out the steering wheel and pedals,’ Mini explains.

‘When automated driving mode is activated, the steering wheel and pedals retract and the driving display disappears from the dashboard.’

It aims to ‘rediscover the romance of travel ‘ and is inspired by tourism posters of the 1950s and ’60s. A personal journey planner displays tips and points of interest.

Chill mode turns the parked car into a peaceful haven, retreat or ‘urban oasis’ in which you can relax or work.

Finally, the Vibe option opens up the side door and folding-up windscreen to create a low-key club or lively and loud a disco: ‘If those on board so desire, the car could even begin to resemble a boombox,’ says designers.

These three modes are selected using a round electronic key – dubbed a Token – which fits into one of three slots in the table. It can also be programmed to configure mood settings such as music, ambient lighting, and fragrances.

© Provided by This Is Money
There is no traditional grille as no engine air-cooling is required, so all the autonomous driving sensors, scanners, and radar sit behind the solid front plate which replaces it


© Provided by Daily Mail
The Mini Urbanaut can be opened using coded smartphones and other electronic devices and the driver can select music playlists, audio books or podcasts to suit the route


Concept points to how future Minis will look

BMW says the face of the Mini Urbanaut concept represents ‘a clear evolution’.

The headlights sit underneath a milled aluminium structure with slotted openings and are visible only when switched on. Their matrix design means they can display different multi-coloured graphics.

There is no traditional grille as no engine air-cooling is required, so all the autonomous driving sensors, scanners, and radar sit behind the solid front plate which replaces it.

BMW said: ‘Conceived from the outset as an electrically powered vehicle with automated driving functions, the Mini Vision Urbanaut has afforded the designers a greater level of freedom when creating both the exterior and interior.’

© Provided by Daily Mail
The headlights sit underneath a milled aluminium structure with slotted openings and are visible only when switched on. Their matrix design means they can display different multi-coloured graphics


The wheels are designed like those on skateboards to ‘highlight the car’s nimbleness and non-conformist Mini twist’.

They are illuminated from the inside with a changing light pattern and finished in a turquoise blue colour called Ocean Wave and aim to spark associations with the beach and the sound of the sea. Union Flag tread on the wheels is ‘a nod to the car’s British heritage’.

BMW says: ‘In signature Mini fashion, the wheels are positioned at the outer corners of the body, with short overhangs rounding off a compact and agile appearance’.

Owners can also pin on the pillar electronic display ‘charms’ which act as reminders of places, festivals or other events visited, just like souvenirs in a domestic glass display cabinet, stickers on camper vans, or badges on walking poles. One even has a QR code which, when scanned, takes you to Mini.com

The matt exterior Zero Gravity paint transitions from a metallic green with blue flip effect to a subtly toned grey.

The Mini Urbanaut can be opened using coded smartphones and other electronic devices and the driver can select music playlists, audio books or podcasts to suit the route.

Head of Mini design Oliver Heilmer said: ‘In 1959, the very first Mini ushered in a small-scale revolution in vehicle construction with its transversely mounted engine.

‘With the Mini Vision Urbanaut we have been able to rethink and increase the usable surface area inside the car even further in relation to its footprint.’

Head of BMW Group design Adrian van Hooydonk noted: ‘This digital vision vehicle offers more interior space and versatility than ever before, but still on a minimal footprint.’

© Provided by This Is Money
The reknowned British designer last collaborated with Mini back in 1999, ahead of BMW’s takeover of the British marque

British fashion designer Sir Paul Smith is – not for the first time – to collaborate on a new limited edition Mini.

Sir Paul, whose designs combine tradition and modernity first collaborated with Mini in the late 1990s with a limited-run special edition of the classic Mini.

Oliver Heilmer, head of design at Mini, said: ‘We are drawn to each other by our similarities, and then we inspire and enrich each other through the differences between the fashion world and the automotive industry. Because there is no future without sustainability.’

Thu Nov 19 , 2020
SHANGHAI — Sales of electric, plug-in hybrid and hydrogen-powered vehicles in China, the world’s biggest auto market, are forecast to rise to 20 percent of overall new car sales by 2025 from just 5 percent now, the State Council said on Monday. Sales of new-energy vehicles, which are made up […] 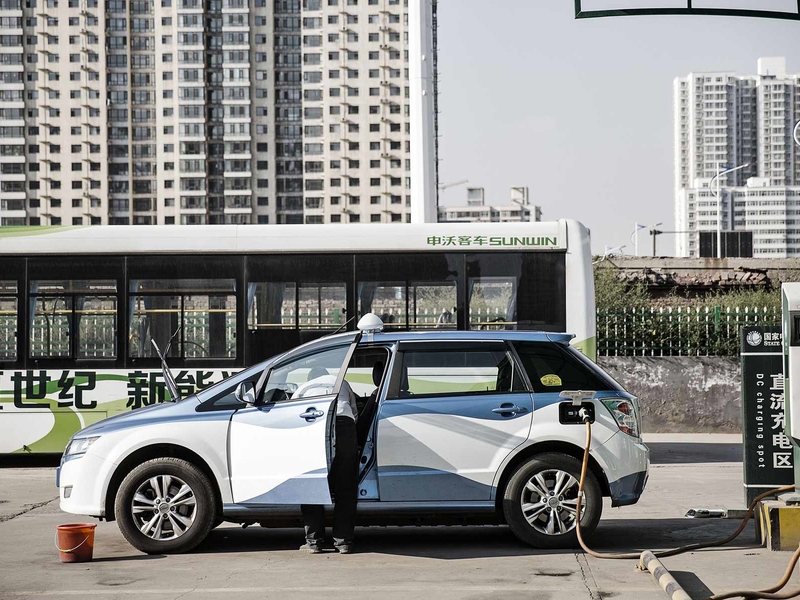