Skip to content
You probably never thought that our transformation vehicles would end up looking like this, and don’t worry, they haven’t, although it would be hella cool. What we see in the gallery is actually a conceptual transportation device meant for Tokyo 2050, known as Infiniti The Cube 2050. Oh, and Infiniti has nothing to do with this. The designer just felt this would be the most fitting brand for such a concept.

That designer is actually a student from Pasadena, California, by the name of Hao Hu. We tried to find a bit of info on the guy, but aside from his work, not much is found. Although it seems he really has a knack for automotive design.

But this concept is anything automotive looking. Rather, it looks more like a spaceship. But, believe it or not, this cube is actually 4 separate vehicles. There is a video to how the whole thing works. 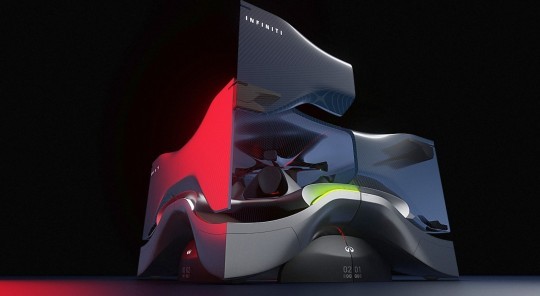 The idea behind it is similar to other ride sharing vehicles we’ve seen before, but with a trick. It all starts like this. The initial cube has space available for up to four passengers, one to occupy each of the four corners. The unit can move as a whole toward a shared destination, but if any of the passenger need to take a separate route to a different location, that corner or even multiple corners break off and take individual routes. This is all predetermined by an application each passenger will be using. That’s assuming phones and such will still be around by then.

As for the Cube itself, it’s one funky looking design. It’s quite difficult figuring out what is what and how to sit in it. The seating arrangement is more like what we would see in the interior of a mother ship. Nothing more than a place to sit upright and a headrest, which is actually dropped into place one you’re in the device.

To get inside the Cube, you have to find a hub where these things would be parked. So you find one using your app, just as you would finding an e-scooter nowadays, and now you’re staring at a giant cube on which is written Infiniti. You approach it with your destination already programmed in your phone, and one of the tops of a corner lifts to allow for access. 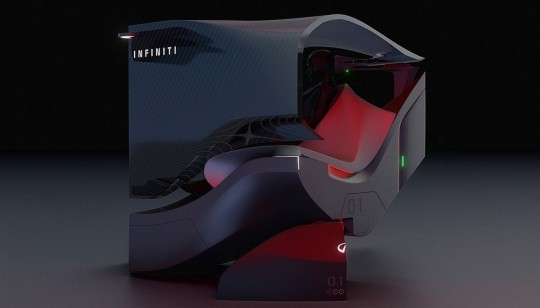 You hop in and the top slides back down. Now you’re just staring at the corner of two walls. Suddenly, those walls seem to disappear, and the image shown is that of the world around you. Even overhead, you can see the sky. All you have to do is enjoy the ride, as this concept is also autonomous, hence the lack of a steering system.

But, to do so, the Cube is equipped with a number of systems including Lidar, cameras, and sensors to map the world around you. All the while you could be sipping your coffee or taking a nap. Or actually enjoying the ride.

Even though it’s a very distant stretch into a possible future that may not even happen, some of the technology this concept would employ already exists. From Lidar systems, to even glass that allows for electronically augmented images to be projected upon itself. It’s a decent dream with some basis in reality